After some delays leaving Las Vegas we’ve arrived in Chicago later than expected at about 9PM. The Lalapolooza festival is on this weekend.  I was hoping to maybe score a ticket for tonight to get in and see the Red Hot Chilli Peppers.  I’m also hoping to catch up with my friends Rhys and Vikki who happen to be in Chicago.

There was a massive thunderstorm in Chicago the afternoon which seems to have stuffed up flights.  They’ve also shut down the Lalapolooza too.  Its hard to believe it rained so much, its been so hot the whole trip. The weather we are having here is much like our Perth summer days. 28-29 degrees with a bit of humidity. We’re staying in the Drake hotel which is slightly north of the main financial district and CBD just and borders on the first northern suburb known as the Gold Coast.

Gold Coast is one of the more wealthy suburbs of Chicago. Oprah used to live here. She is in California at the moment so I’ll miss my chance to get her autograph… wow so spewing.  Like San Francisco much of the city has been rebuilt or repaired last century on land fill because of a significant city disaster. For Chicago it was the great fire of 18 something.. which was started by some rich mole who owned a dairy. She was the Gina Rhinehart of the day.

For some stupid reason she decided to milk her cows at 10pm one night.  The cows weren’t expecting this and shat themselves when she walked into the barn. One of them kicked the lantern Gina was holding out of her hands and onto the floor. The barn then lit up into a fireball which then destroyed most of Chicago. Conveniently Gina’s own homestead was actually spared from the blaze. So the Chicagoans had even more reason to hate her guts and suspected she did it on purpose because she was a bitch.  Well this is the most commonly told story about how the fire started.

Those appointed to run Chicago over the years have also done a pretty shit job of things. They’ve had 4 Mayors actually convicted and jailed for corruption, with the most recent as the previous Mayer. He got 14 years. Which is totally ironic considering one of the other things Chicago is famous for in history is it being Al Capone’s stomping ground. 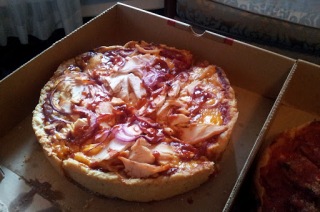 Chicago is famous for its hotdogs and deep dish pizza. Yesterday we tried deep dish pizza, which started out awesome and ended in a food coma of regret. It’s about 3 inches of pizza topping loaded into well, a pizza pie. I haven’t yet tried the Chicago hot dog. If you ask for ketchup in Chicago on your hot dog they will shoot you?  Anyway I’ll have to get one at the baseball in New York. There are no games on while we are here in Chicago.

It feels like Chicago is going to be a good place to detox from Vegas. After recovering from the deep dish pizza, that was the final straw. I don’t think I can face any more big cooked breakfasts and buffets for a while. We bought a whole heap of fresh fruit, yogurt and cereal from the local Walgreens stores. Walgreens is a big USA pharmacy chain. It’s food sections are lot like the IGA’s stores we have.

Unlike San Francisco, Chicago is a very predictable city. The city overlooks the great mass of water of Lake Michigan and there are several spots of interest to visit.  It feels safe with plenty of coppers on the beat.  I dunno if that was because of the festival being on but they were on every corner. The lake behaves more like an ocean and there are a couple of beaches on the cities edge which you can go to. They’re a lot nicer and bigger than Bondi. We went to most of the usual tourist spots.  Millennium Park and out to the Navy Pier. The Pier is over a KM long or something and just seems to go on and on.  Its nice and its really busy but it just doesn’t have that wow factor.  Maybe because there is just nothing out there in the Lake to look at or easily access? 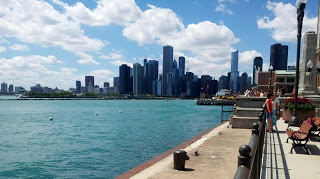 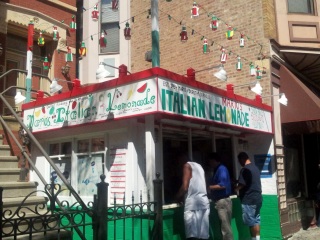 There used to be a larger Italian community and influence earlier last century. Around the the time when Al Capone was at the height of his notariaty Little Italy in Chicago must have been a lot more interesting than it seems now.  This is a little Italian lemonade stand in this district.

The CBD has a river and multi bridge setup which reminds you a little of Sydney or Melbourne. There are some nice restaurants, shops and bars along the river boardwalks and we had a great steak dinner with Vikki there. It makes for really nice summer evening dinning. 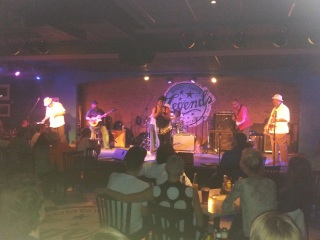 The highlight for me in Chicago was checking out the blues bars. We met Rhys and his USA crew at Buddy Guy’s Legends.  Blues legends like Eric Clapton and Stevie Ray Vaughan have played this club along with many other well known musos. Its a great little set up with memorabilia section at the entrance and then the main bar. The stage is off to the side with a heap of sit down tables in front of it. Theres plenty more guitar and artist related memorabilia all over the walls. 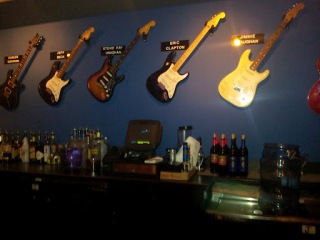 On stage were some old local guys, the Jimmy Burns band. Jimmy has that classic blues voice a bit like a tamer James Brown or a more crusty Robert Cray. They about a two hour set and then its “jam” time.  Bring your own instrument down to the club, put your name on the door and you can get up and jam in a mega blues band set up. Tonight its the jam with Jimmy and guest lead singer .. ummm B.B. King’s daughter.. I missed what her name was.  I’ve never seen a cleaner well kept bathroom in a bar than this place.  Most probably it was because of its old timer attendant who lovingly cleans the hand basin water overspills in between handing you towels.

You just gotta love how there was different people of all ages sitting at tables enjoying a meal over classic blues.  I know we have this in Perth with a good Jazz and Blues scene. It just got me thinking why we can’t do this kinda thing with rock music.  It wouldn’t suit every style of rock, but why does rock and roll have to be played in a skanky pub rock-everyone-gets-drunk-dances-and falls-over setting?  In 20 years will we one day all sit around at tables all civilized like watching rock and roll bands reminiscing about how that was “real music”.  I hope so.  Although especially at a local club or bar level, I wish the live rock and roll scene was more like this now.