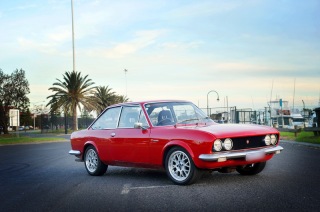 Its 2012 and this is my first post for the new year. I’ve been slack on this blog, instead trying to be a part time mechanic! I’ve spent a lot of the summer getting back into restoring my 1973 Fiat 124 Sport Coupe.  During high school and my uni years, sheez along time ago.. I got my first Fiat 124 Coupe. I had my licence for a couple of years and thanks to my Uncles who were in the used car game, I picked up a tidy red 1974 Fiat 124 Coupe from them –  I think it was for $1,000.  I also have them to thank for getting me hooked on Fiats.  In their late teens and early 20’s they had a number of Fiats which they did up to sell, or keep and sometimes unfortunately crash!

I’ll never forget the afternoon when my uncle arrived at my primary school to pick me up with my brother and sister.   He was driving a Fiat 124 sedan which was sporting an rainbow primer paint job.  My sister refused to get in the car and ran all the way home, too distraught and disgusted with the Fiat’s appearance.  It must have been a sight – us boys in the beat up multi-coloured Fiat crawling along the road laughing and calling out to my sister as she ran. “Getin the car”  we’d call out. “NO!! go away I’m not getting in” she’d yell her anger fueling her feet stomping journey home. 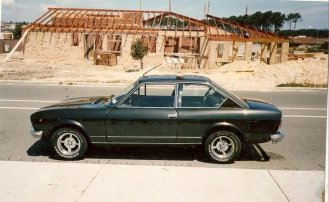 The 124 Coupe was their favourite Fiat and it immediately became my favourite too.  My uncle built a beautiful dark gun metal black 1975 coupe which I’d drool over every weekend we’d visit them.  When I got my own red 124coupe my Uncle also generously helped me out replacing the front ball joints, gave me Dragway mags for it and taught me how to tune it.

The Fiat 124 Sport Coupe was built over 3 series – the AC, BC and CC models.  The AC coupe was the first series launched in 1967 and was designed by Mario Boano.  The Fiat coupes were way ahead of their time in design features.  The AC came with a 1438cc four cylinder, aluminum, twin overhead cam engine which was designed by ex-Ferrari engineer Aurelio Lampredi.  The AC also had double wishbone front suspension, a 4-speed gearbox, 4 wheel disc brakes,  front and rear anti-roll bars and a torque tube rear axle. It featured a 120 mph speedo, a separate tachometer, three supplementary gauges, a faux wood steering wheel, a wood grain dash and console top.

Released in 1970 the BC coupe was the 2nd generation 124 coupe and it had a larger 1608 cc engine. It is a “square” engine of equal bore and stroke which allowed it to be the more sweeter high revving of the 124s.You could also get twin carburetors with this model from the factory . The BC also received an extra set of front headlights and an extra overdrive gear ratio with its 5 speed gearbox. The rear of the BC coupe shares the same 60’sinspired tail lights from the Lamborghini parts bin.

The last the coupe series, the 1973 CC had the biggest engine (1756 cc)and most power from the factory. Some say its a bit uglier than the BC with its rectangle front grill design. The CC got matching bonnet vents, vertical taillights with an “L” shaped boot lid and redesigned rear quarter glass panels.

So, today I have a silver 1973 CC coupe and a red  1972 BC coupe in my garage.  Like the Meatloaf song “two out of three ain’t bad” I don’t think I could handle the brain damage of having 3 Fiat coupes and getting an AC coupe to complete “the set”. The silver CC coupe I’ve had for over 15 years with most of that time been spent asleep in my garage.  Its soon to be out and alive again.  In the past 6 months I’ve replaced most of the front suspension, recon-ed the brakes, added 15 inch wheels and new aftermarket seats. 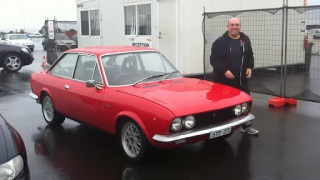 The red BC coupe I purchased from Melbourne.  This car really was the catalyst for getting back into Fiats. I debated with spending $5,000-$10,000 (or who knows) on doing a bigger restore of my silver CC.   I spotted the BC coupe about a year and a half ago on car sales.  It had a lot of work and extra go fast bits put into it by its previous owner. Many things which I wanted to add to a Fiat coupe were already in this car.
The car wasn’t selling and I was able to pick it up for a lot less than the owner had put into it.  It has a bigger 131 Fiat Supa Brava 2,000 cc fuel injected engine, rebuilt gear box, bigger Ford LSD diff,sports seats, lowered suspension set up, duel fuel pump system with surge tank and a nice set of 15 inch performance wheels.