It’s time for a whinge today about public transport.  You’ll see the gamete of human behaviour on buses and trains.  I think I’ve just bout seen it all.  On the buses there are some common and definable bus character types. (Public Transport Personality Types – PTPT) These are just a few of my personal favourites:

The Fort Nox:  These geniuses will use their suitcase or bag as a strategic defense system to block out the aisle seat so they can sit luxuriously against the window.  I’ve even seen some bags used by these morons with a deploy-able moat (with sharks+crocodiles) and drawbridge attachment. I particularly love watching them reassemble and reclaim their bags feverishly when you stand waiting to sit next to them. They become even more panicked when you motion to touch their bag to move it for them!

“The Erol Flynn”: This is the joker (mostly male) who you’ll see sitting against the window (most WA buses have two per person seat configurations) with their legs spread super wide. Because yes mate, you have a massive cORRRRrrk!  Yes yes I know its cramped and the seats are way to small but seriously dude keep to your side of the seat.  Typically this moron will be part metro-sexual/part bogan and usually be sporting an “Elwood” tee shirt. Maybe also even something more pathetic from Ed Hardy. Did you get the memo fool.. yes you’re a dickhead!  When sitting in the aisle, these are also commonly the wankers who won’t actually stand up to let you out if it’s your stop. They’re also very angry because they had to catch public transport because their Maloo HSV ute just got impounded under WA’s Hoon Laws. They’ll make a piss poor effort to barely shuffle their knees out of the way to let you out.  The shot-put in my man-bag swung “accidentally” during the awkward clammer to get off usually sorts these fools out.

As an interesting aside to this – Seat Etiquette behaviour. Okay, when you are sitting next to someone and you’re in the aisle seat and the bus  empties so there is plenty of “twozys” (two seaters) available.  Do you move?  Do you stay?  If you move is that rude? Will it shatter ya new found bus friend’s self-esteem?  Or are you a strange freako if you stay? 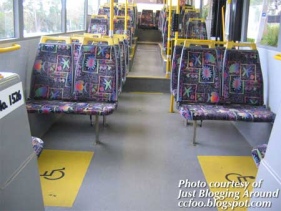 “Grass is Greener-er”:  This chappy will reluctantly sit next to you but just can’t wait to upgrade to a free two seater space when it becomes available. The worst of these species will still want to move even when they have the window sea. They’ll compare and contrast scanning in infra-red and evaluating seat physical and positioning characteristics.  “Ooo this seat has non graffiti views, it’s close to the door… location location location ooo I don’t like the look of that guy” (Erol). It’s a lot for their Pentium 2 MMX brain to take in. I particularly like when once they’ve chosen their new found seat love.. someone sits next to them they begin to snif .. snif.. and realise in horror that yes their seat is in fact wet.  Or could this odour coming from their new seat companion?  Here’s a tip to remember; wet seats look like new seat covers losers!!  Also the 3rd seat row after the back door is always on top of a wheel arch so you’ll be wearing your knees as earrings if you pick this seat.

“Seat Hopper Shopper”:  These varmints are related to the “Grass is Greener” species only they just can’t decide which seat is worthy of their precious arse in the first place.  They’ll start at the front of the bus examining seats for imperfections.. “oooOhoo I just can’t possibly choose”.  Finally they settle their arse into a seat only to discover in horror it has a 15 year old baby spew stain.  So quick smart they’re up and off.. Searching some more for that elusive perfect seat.

“The Hibernator”: Our nocturnal fellow bus traveling friend either sits in the aisle seat, or takes up both seats pretending to be asleep. It’s not uncommon for a bus traveler to be one or more of these bus character types at once. Some Hibernators also try to employ “Fort Nox” seat defense bag tactics.  “I can see your eyes moving dude!! Hello!”  It’s funny how they always manage to magically awaken the instant before you PUNCH THEM IN THE FACE! .. or you drop 20 cents at their feet.

“Dirk Hartog”: These morons get on the bus stagger a few steps gripping a railing for dear life and they won’t move.  “This is my spot and I’m claiming it for my mother country!!”. There may be 20 seats spare or worse, spare seats down the back of the bus.. but nope “I’m staying right here mutherfu***rs”  they growl  on the edge of insanity under their breath.  For some reason (maybe they are more intuitive than I give them credit for) they believe the bus is about to overturn Poseidon Adventure disaster movie style. Their eyes dart around in a paranoid panic when the next poor soul tries to squeeze past them. Yes, these guys can often also be ‘Public Shoppers’ and or ‘Fort Knox’ soldiers, but more so in their infancy.  They haven’t worked out that they can stake a claim to guess what…. A  SEAT genius!!!  Typically these guys will bank up the aisle in the front section of the bus with there being plenty of seats still spare further at the back. 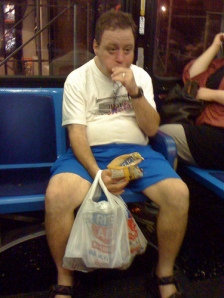 “Public Shopper” (Shepard): I kinda like these guys, well not really. They get on the bus with 4-5 plastic shopping bags full of the weekly shop.  Sometimes it’s only one or two bags with either random groceries (like bottled gherkins) or necessities like an 18 pak of bog rolls.  They always hustle themselves up the front of the bus right in the aisle blocking everyone of course.  Why I like these guys is; because your bus driver is an arsehole and loves to brake digitally, your bound to have a jerky uncomfortable ride. So, their plastic shopping bag is guaranteed to break. A 3 litre coke bottle or full clip of baked bean cans is bound to machine gun down the bus floor and under all the seats.  It makes for some good old donkey kong barrel jumping memories.  Priceless also is the humor in watching our shopper friend internally debate in that golden micro moment –  should they stay and guard their remaining grocery flock; or take off after the escapees from the herd?

“The Surgeons”: OoErr I shudder just thinking about these guys.  They seem to think it’s perfectly okay and acceptable to perform self administered medical procedures on the bus.  I’ve seen a liver transplant, male prostate exam, 3 digit nostril enlargement ..  okay just one of those. But there is the good old “pick ya nose and eat it”..  zit puncture-ers.  Most recently was a woman who took much pleasure in scraping off old dead brown heel skin flakes with her credit card and flicking them.

“Leftovers Lucy”: Smells.  Public transport has a myriad of them. Mostly though they are part of the fecal group family.  However, often you’ll get food smells too.  Now these are not the delicious cooking smells like chips or BBQ chicken and steaks.  No, instead they are last night’s or lunch time’s KunG Poo beef leftovers.  There is only one thing worse on the bus than the cold stench burst when the plastic lid is ruptured.  It is the squooshy poo surround SOUND you hear from the seat behind you when Mr meal economiser tucks in to eat his cold shit tray.

“Princess Mutton”: She’s the “mutton dressed up as lamb” girl who ran out of time to do her makeup at home and or prefers to apply it on a moving public transport vehicle.  It’s never a case of less is more with these gals too.  The grimacing faces these woman pull while putting on their makeup are priceless with their resulting “face Orrn” bound to scare little children. These girls think “Erols” are their perfect man.

“Dopey Helga”: from Sveeden has two giant rucksacks and is always unprepared for public transport.  But you can’t help but love Helga, she’s living the dream.. seeing “Orstrayia” and of course is on holidays. Whereas it’s Monday morning and you are off to the office.  Helga is always very friendly and LOST! So you can play friendly Aussie tourist guide and get her where she wants to go – Usually the backpackers.  Play your cards right and she’ll show you her titties for sure!

“Dis-organised Sally”: This is the person who catches the bus everyday yet still hasn’t worked out how to prepare themselves to get onto the bus. They’ll be waiting at the bus stop 5 mins early yet they’ll take another 5 minutes to extract their bus fare from some Babushka doll like bag-purse-purse while standing in front of the driver. 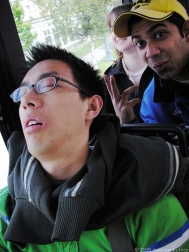 “Sleepy/Stressed Student”: These guys can be seen scurrying among a nest of papers and study notes in a last mad cramming panic for the exam they are already late to.  Guaranteed a “Dopey Helga” or “Disorganised Sally” will make them even later.  If they’re not cramming  you’ll see them fast asleep or slowly nodding off – usually towards your shoulder.  That’s because they’re also working 4 jobs (one being mum and dad’s Chinese take-away)  studying and playing “Other Life”. Or they could have been out partying, damn them!!  Bus trips are the only chance to sleep they get.

← Dollars or Democracy?
How to Play Bass on Stage →
Follow SK-Bass on WordPress.com