Danni Stefanetti’s new single “Moon Looks Pretty Tonight” has been also released with a video clip. Directed and produced by Duane Orris it is also Danni’s first music video. But first, lets have a listen to the song.  The Moon Looks Pretty Tonight  reminisces and longs for  the blissful naive feeling of young first love.  Its a pop love song which also has a sense of urgency reflecting the almost vain hope of finding that true love feeling again.

Interestingly, the song introduces the chorus in the beginning of the song, albeit broken down with bass drum missing in all but the first bar beat. The drums coupled with the pacey bass and rhythm guitar form the “foundation” of the song. This is nicely opposed with the “Lead” (vocal) and “fills” (piano) in the verses. All elements then come together to drive the chorus.  Just like a full moon comes and quickly goes, the double time drumming in the chorus adds a “time is running out feel” to the lyrics, the urgency. The broken down drum beat and intro guitar theme is revisited about 3/4 into the song which gives a momentary realisation like feel of futility there is trying to recapture young perfect love. I also like the “space” the same dropped out bass drum gives to the verses.

I’m not sure if it’s deliberate, but at this point in the song, changing the chorus-to-end lyrics also changes the song’s focus; perhaps away from the young love is blind moon gazing-ness, to the stark reality check of never being able to feel that way again. While you could lose the hook of the chorus because of this lyric change, it doesn’t bother me to end the song this way – rather than say a simple repeat to fade. Danni’s vocal is also the best of her work to date throughout. I particularly like the intro-revisiting breakdown vocal part (bridge), again about 3/4 of the way through the song. I think I also prefer Danni’s “pop” song melody writing to those songs of hers which have a country feel. 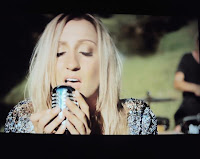 Having only a day to shoot the video clip and I imagine not an open cheque book for production costs, I’m glad Danni chose not to skimp on the video image production quality. The moon does indeed look  pretty in 720p wide screen. Every shot is made with a constant but smooth moving camera which adds life to the clip, but is also not too distracting. Shot in country W.A somewhere, the clip shifts between scenes of Danni playing in a country field with her drummer and pianist, to scenes of a young couple frolicking in young love. There is also some pretty added imagery with flickering lanterns, feathers and of course, a full moon.

There is just a couple of things I would have done a little differently which would have also not added any costs to production.  (Sure, some huge helicopter cam-zoom shots would have been nice too!!). Danni has these big gorgeous Disney eyes and I wanna see and connect with them right from the opening shots. Shooting with Danni looking directly into the sun may have contributed to some squinting?  Danni’s love interest in the young couple scenes looks a bit too much like the guy who is playing the drums?  Maybe its just me, and its the same beanie they are wearing which throws me? But if it was intended not to be the same guy, maybe a big black afro wig on the drummer could have “disguised” him a bit better? (okay maybe not a wig).

The shots in which Danni is in a “picture frame” I also think could have been more striking if she didn’t “sing” (particularly in the bridge – 3/4 breakdown “realisation” section). Whilst I love that Danni is also a guitarist (look at that sweet relic wear on the strat in high def!) maybe she could focus less on playing it (looking down) in the video. You don’t need to be so exact in a music video but this is probably testament to how used Danni is to actually playing and singing live (ie. being a REAL artist/musician, take note tart chick “singers”).

So, overall its an easy clip to watch which reflects the songs subject matter literally with some departure to artistic themes. A great package for Danni to take with her on her next trip overseas.  You can watch the 720p video here.

Read my review of Danni’s EP “So Real” here.