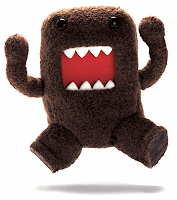 Its not everyday that you learn your nickname-sake is a massive internet and TV sensation.. in Japan and the USA.  Domo-kun is a small brown open-mouthed monster hatched from an egg who lives with a wise old rabbit. As I googled and learned more about Domo I could’nt help feeling a little like Homer in the “Mr Sparkle” episode. Apart from simply Domo’s appearance, the similarities were too uncanny to be just a coincidence.

“Bared teeth notwithstanding, Domo proves to be a friendly, innocent, somewhat nervous being who seems to enjoy dancing, daydreaming and lying around in a cave watching television”.

Domo is also known to pass gas repeatedly when nervous or upset.

Domo also has a groovy theme song and merchandise!