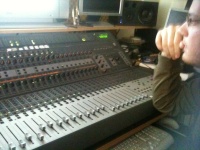 Its now my turn in the studio to put down the bass parts for “Steal Your Mind“. We’re recording our 2nd EP at Stellas Kitchen and Steal Your Mind is probably going to be the lead track.  Recording for me is a love hate type of thing. Every musician has their insecurities and doubts about their ability and for me its recording which is where these feelings surface the most. For bass every pop or string clack in your playing stays forever on the track.

There is pressure for time and and testing of your patience.  Its the same for everybody else too and I really marvel how the drummers can get it so right in their takes.  There is this crazy little panic which sets in trying for “perfection” in a take.  Sometimes if you get caught up on a section it can really do your head in.  In saying all that, the magical little creation moments you have on the fly when you nail a section or invent a whole new one make up for it.  That’s also not to mention the excitement of hearing back the song as it grows with each part that gets added to it. 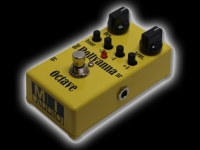 I packed up the P-Bass  and my new 60’s/70’s White Jazz (now aptly named “The White Horse of the Apocalypse” by Carlo ) and the Ashdown rig to take to Harpoon Studios. White Horse has new DR Stainless Steel Low Riders on it which I haven’t used before. So the tone set up was to try miking up the Amp and running a DI direct signal.  I spent all Friday night with Jon playing with tone settings to shape the bass sound we want for the track. This is where the brain damage of recording begins. I think I probably drove him crazy trying to find the right sound but more so from my indecisiveness.
For me, I like to capture the growley Fender Jazz note after tones  you can get without over driving the signal too much.  It was also a case of determining what was the bass sound we wanted for the song too and a tone which would fit  with the guitars. We were also after a Fuzz/Drive tone for at least a section in the 2nd verse of the song, so Jon brought along his MI Audio Pollyanna Octave (actually I think it belongs to Shea dog).  By the end of the night my head was melting from all the different combinations we tried and I was sure we still didn’t have a workable tone for the song. We bounced a full take of the song to take home to listen to.
What a difference fresh ears make – the next morning listening back to the track on the home stereo and through headphones I was shocked to find it wasn’t at all that bad! It pays to listen to your recordings on other sound devices along the way just in general too.  One of the recording challenges is also try manufacture your song to sound great to listen to from  a range of devices from house stereo to the iPod.

So back to Harpoon on Saturday to get the bass parts down!  It turned out the best tone we were happy with was the White Horse bass going into the valve DI direct.  Brain damage part two would now commence trying to map out the bass part and me actually playing it!  We recorded the majority of the song through the value DI with the Fuzz effect in the 2nd verse being the Ashdown Amp  &amp; Pollyanna with a bass drum mike. You can have a secret listen to the raw result here (drums, 2nd guitar, Bass). Listen out for the Polly its sounds fuzztackular!!