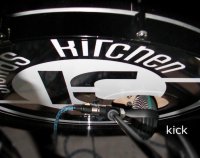 At Stellas Kitchen land we’re recording our new EP.  So far we’ve completed the drum tracking and some guitar parts for two of the four songs and to be released on the EP. We’ve taken  extra time and effort to prepare how each instrument will sound this time through and have done a heap more experimenting.  Once we had the tempo, we recorded basic scratch tracks of guitar and vocals for each song. After they were down, we started trying to get some good sounds for the drums.  Jon is blogging the process here on the Gear Page forum. The aim of that thread to create a bunch of advice and sound samples/reference material etc, for anyone interested in recording and music in general.  Its a little bit into the inside of SK too.

Anyway,  we were asked by 91.3 Sports FM if a song we play called “Blindsight” could be used as a theme song/ intro out-tro for their radio shows.  As we don’t have a decent recording of this song as yet we set about getting a quick 1min grab of the song for them.   This was a good chance for me  to give the new P-Bass a crack for recording before I have to my bits for the  new EP. Its recorded straight from the P-bass into the value DI and then into the Harpoon Pro Tools set up.

I’m a strange player in that I hate using a pick so I’ll use the ends of my finger nails instead…. yeah i suck, whatever!  So there’s a combination of finger and finger-nail playing on the track. There’s also flat wound strings loaded on the bass too. We were getting a hum from the pickups/controls which can be not uncommon  – could be my awesome wiring/soldering job… but an extra finger and thumb from Jon earthing to the bridge while I played takes took it all away.  With no applied EQ on the bass we were pretty happy with how it sounds. There is a more natural mid lumpy bass sound which cuts through well in this modern blues type song.  Anyway you can have a listen here and see what you think.