Over the weekend we made aquick dash to Melbourne to catch the John Mayer concert at Rod Laver Arena.  What’s not to love about John Mayer. What he does is provide something for everyone, in the disguise of a pop concert. Every aspect of his song writing, arrangements and playing is so well crafted. Not in a deceitful or pretentious sense, but as another musician or music fan you can’t help but learn or take away something special from his performances.

John Mayer can play and can he write damn good pop songs! The young girlies next to me swooned and squealed at his husky heart break radio hits, losing interest slightly in solo or instrumental breaks.

This is where the guitar heads got their worth studying his and the bands unbelievable playing, equipment and sounds.  I just took it all in and enjoyed all of those aspects.  I really marvel sometimes how blissfully unaware some people are at the brilliance performing in front of them. How “awesome” to some people can include Rhianna, Robbie Williams and 20 other pretenders. And the fact these losers “artists” can get away with it!!  That’s part of why I’m such an angry man these days. 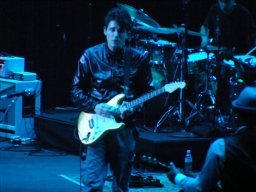 Turns out he was probably staying in the Docklands as well!!! The photo on his blog was taken at sunset the night of his gig. If he was there he may have maybe noticed the white elephant the Docklands development is. Its pretty much a ghost town. If we were not wogging it up with our great friends at Dominics Pizza in Footscray there would have been a fair chance we’d have run into each other and mused on the lack of fellow human beings in the vicinity.  But that’s what I think makes it a nice place to stay when visiting Melbourne.   You’re pretty close to everything and its safe and quiet environment which I prefer for when it comes time to go back to your room to veg or sleep. Melbourne for a 3-4 day concert getaway – you rule!!