There is plenty of debate about which is the best sounding Jazz bass era.  From what I’ve read and the opinions I’ve heard most seem to say the early 60’s was the best decade for Jazz basses. That is, before Leo Fender sold Fender to CBS in 1965. Production quality went downhill from this point as CBS sought to maximise every cent out of the Fender business. Fender bass nerds far and wide argue about whether it was the basses made in the 60’s, or those made in the 70’s which are the best. I’ve never played a legitimate 60’s or 70’s bass so I can’t say.

However, I do like different design features in each decade which are more cosmetic than anything. The 60’s series of basses had the stacked volume and tone controls (2 knobs) which I find a bit dicky.  The three knob set up works much better and is easy to use without having to look at your controls. Fender make a 60’s and 70’s reissue series of Jazz basses. They each have been created to replicate some of the design features of the original 60’s and 70’s basses. Each series comes with vintage single coil pickups recreated to mimic those found on these basses.  There are also set colour combinations available from Fender in each series which can be limiting. The original 60’s pickups were known to be a bit noisy and to “buzz”.  The newer made reissue pickups don’t have the noise. The 60’s Jazz basses also came with the chrome pick-up covers. With the large “ashtrash” cover over the bridge and a slimmer cover over the neck pickup.

One of the best design features of the older and vintage basses is they came with a much thinner nitrocellulose lacquer paint finish on the bodies.  Thinner paint allows the body to resonate better and when the nitro lacquer wears you get that great distressed relic vintage look.

In the 70’s, Fender Jazz basses  came with the sweet looking pearl fret inlays and neck bindings and had the larger Jazz tuning heads with the cool Fender logos.  (This neck design was really the focus for this build – I just wanted a 70’s inlay neck okay!!).  In the 70’s, Fender shifted the bridge pickup a little closer to the bridge. I tend to like playing a bit behind the bridge pickup if I’m going for that sharper toney bridge sound so I like the extra space away from the bridge the 60’s (standard) placement provides.

What if we could combine different aspects of each of the 60’s and 70’s Jazz basses? There’s an idea!! I want to build a nice clean white Fender Jazz bass like this:

You should check out The Stratosphere on ebay.  They have a massive range of Fender Guitar and Bass bodies, necks, pickguards, pickups, cases … well just bout everything. They break down new and 2nd hand guitars and offer the parts separately.  This may seem like Jawa junkyard sacrilege pulling down a relic or new Fender into bits. But, its pretty much heaven for fender spare parts and if you are like me at the moment, into building your own custom fender guitars. 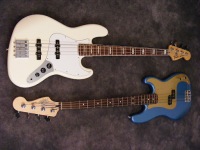 ‘m also keen to give the P-Bass pickup setup a go but as I’ve ranted before, I’m not into the P-Bass necks. Stratosphere list Precision and Jazz bass bodies and necks separately, with new stock coming in all the time. Jazz and Precision Bass bits are very interchangeable.  In the process of  trying a P-Bass-Jazz neck setup up I decided to upgrade my Mexi 4 string Jazz to give it a sunburst 70’s Jazz look.

I bought an Olympic white 60’s reissue body which has the closer together pickup spacing and the 3 volume controls setup. I also bought two 70’s reissue necks which have the pearl inlays. The 70’s reissue neck  will fit all Fender four string Jazz bodies with no problems.  I’m pretty sure the same can be said for P-Bass neck pockets too. My Mexican sunburst Jazz bass got a new 70’s reissue neck and the 60’s reissue bridge. The 60’s re-issue bridge has usable grooves which help seat the strings nicely. I put on a black pickguard to finish off the sunburst 70’s Jazz bass look.

The white 60’s reissue body also got a new 70’s Jazz neck and a standard white pickguard to finish off the clean all white finish of the bass. I bought a new Leo Quan Badass II Bridge  to put on the white bass. The Badass bridges are loved by many because the extra metal mass they have translates to more sustain from your bass. Try and get one with the grooved saddles if you can because the strings can slide around a bit on the “smooth” ones. I loaded in some light gauge DR Sunbeams (0.045-0.105) then worked on the action and intonation which was surprisingly easy to get right.

You can have a bit of a listen to the white 4 string bass bass here.  Its a short clip of a section of a song we’re working on in Stellas Kitchen.  Its this bass into an Ashdown ABM 500 EVO III Head and 4×10 Ashdown cab. A MI Audio Pollyanna was used for the fuzz effect. We used a kick drum mic, the AKG D112 positioned about 1m from the cab.  So in the end, I’ve merged together what I like about the 60’s and 70’s designs and colours into 2 basses.