True to form, adding bass effects to my bass experience has also been an arse about process.  I really wasn’t sure what sounds I wanted or had any idea what was good.  I only had a vague idea about what the good bassists used or what effects were being used on records. I came across the Zoom B2.1u multi-effects bass pedal. This little unit comes in a niffty all in one package (yes looks was an important characteristic at the time) which electronically models and trys to copy well known amp, cab (like Ampeg SVT) and stomp box effects pedals (eg. tube screamer).

There is also a pretty good tuner and expression/volume/ pedal (wah type).  I’m no expert on effects and how they should sound, but with a bit of mucking around with the controls and settings you can get some reasonable sounding effects from the unit.  Its just not flexible enough as far as controlling saved tones and effects in real time when you are playing live.

Trying to store many weird and wonderful “voices” or saved presets in the memory banks is just to hard to use efficiently playing live.  The unit uses two metal pedal switches to toggle up and down through about the 50 tones you can save.  They are split between 4 banks which makes it a bit easier. But mostly it gave me a chance to play around and learn about effects and bass tone.  In saying that you can get some value from this pedal though if you don’t use too many bass sounds.

For me, there are/were 3 worthwhile ways to use this pedal:

1) AMP and CAB Simulator –  If you’ve got an average amp and cab – especially one without any tubes.  The preset models like the Ampeg SVT SWR and “Tube” simulators can really add a heap to your sound.  Just select a couple of these and save them into your tone bank. If your playing live you could also set up your tone/sound requirements for each song in your set and save them as individual tones in the presets.  So its like you are selecting “songs” from your tone bank.

2) Stomp Effects – What I do here and turn everything off as far as amp and cab mods and EQ and just use the tone bank as a stomp box.  So I have say Delay, Overdrive, Fuzz, Wah, Chorus etc saved separate presets.  This is where this pedal starts to let your down because you can’t switch quickly between effects or toggle them off individually.  But if you’ve got a song where you are using your stock “normal” tone and you have to switch to an overdrive section you can assign the wah like foot pedal to kick in the effect when you need it.

I then bought a Line 6 POD X3 Live on ebay thankfully for about half of what they are worth in the shops!  Its pretty much more of the same as far as its usefulness playing live like the Zoom. However you can control effects (stomp boxes) independently through a separate row of footswitches.  You can have up to five effects (like overdrive, delay, compression) on the go at once.  Its pretty fiddly and it took me ages just trying to get a decent output signal level to my amp.  In saying that its pretty cool when you hook it up to your laptop to work on your presets and effects settings.  I had one go at it using it live and it went all bad so I haven’t  used it since. I mean I didn’t do enough preparation or work on the settings and effects as I have now, and thats just how it goes when you use new gear live for the first time –  there is always teething problems and shit that just goes wrong.  I probably should give it another chance…  hmmm… nuh! 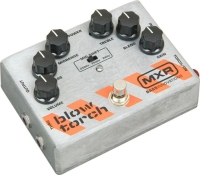 However, just like everything else to do with bass theres “nothing like the real thing!!”.  So I ‘m now currently building a good old pedal board with some real stompy box pedal effects.  The multi-effects units weren’t a total waste and they are still usable.  If anything they have given me a good insight into effects generation and I have learnt a heap more about the classic effects, amps and cabs from the past.  For the songs I’m playing with Stellas I need a good tubey classic sounding “standard” tone and a fuzzy overdrivey sound similar to Tim Commerford  the madman bassist from RATM and Audioslave. So I’ve been doing a bit of research and I’m liking the MXR Blowtorch and the Sansamp Bassdrive Tech 21 VT  I’ll probably keep using the Zoom as a tuner and volume/wah pedal.  Sansamp have a new version of the Tech 21 coming out which includes the ability to save 6 preset tone settings.
I think I’ll have to wait and get me one of those bad boys! The MXR Blowtorch is a distortion pedal but really it also puts out some good fuzz tones as well. What I really like about this pedal is it really keeps the lower bass frequencies intact when adding in your level of effect.  The Sansamp is about as real as you can get as an emulator for the Ampeg tube sound and overdrive.  Sansamp are well known as the ultimate for this purpose without having to drive the crap out of your gear (Ampeg or not Ampeg).